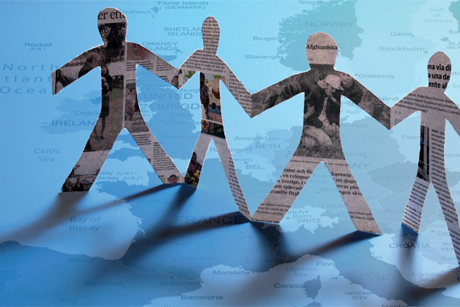 Since its worldwide diffusion in the 1980s, postcolonial theory has questioned the problematic location of subalternity in cultural products and in the materiality of everyday life vis-à-vis the position reserved for the hegemonic subject – described as coherent, uniform, auto-determined, Western, individualistic, efficient, and so on. Despite its continued actuality and urgency, however, the figure of the Other/Subaltern has largely disappeared as a central concern from public discourse of the last few years. In the meantime, discussions of subalternity have fragmented and scattered across various academic disciplines, art projects, and (sub)cultural practices.

The world produced by globalization is not a homogeneous and neutral space opened to individual action, but is made of interactive networks. These grids and currents continuously overlap with one another, are produced through an asymmetric distribution of power, and give different access to different subjects (S. Sassen). Nation-states are not weakened by this dynamic; to the contrary, the global flows often confer new strength upon them. Moreover, the states now emerge as “fortresses”; their interactions and tensions thus require a properly transnational approach to be read (Ch.T. Mohanty).

However, the defined borders of the hegemonic positions must confront the possibilities opened by identity models and cultural contents gaining a new power; in such a scenario, the forms of creative acquisition and artistic production of the Other/Subaltern become part of popular and public discourses. The contemporary metropolis can be specifically read as a laboratory for the multiplicity of cultural production in the global world; for instance, the diasporic subjects relocate themselves in the urban tissue, creating new networks of influence and exchange. In this sense, they can even reconfigure their “culture of origin” through an orthodox lens, generating a “fanatic” narrative of themselves (A. Appadurai).

The special issue will consider the role of the postcolonial theoretical framework and the eventuality of a reflection on neocolonialism as still efficacious, if not essential, tools to interpret the contemporary world. Contributors are therefore invited to take into consideration theoretical issues as well as specific case studies related (but not limited) to these themes:

Contributors can send their abstract (300-500 words, 5 keywords, and 5 bibliographical references) and a short biographical note (150 words) to submissions.cinemaetcie@gmail.com and ilaria.depascalis2@unibo.it by April 30, 2016. All notifications of acceptance will be sent no later than June 1, 2016. If accepted, 4,000 word essays will then be required for peer review by September 1, 2016.