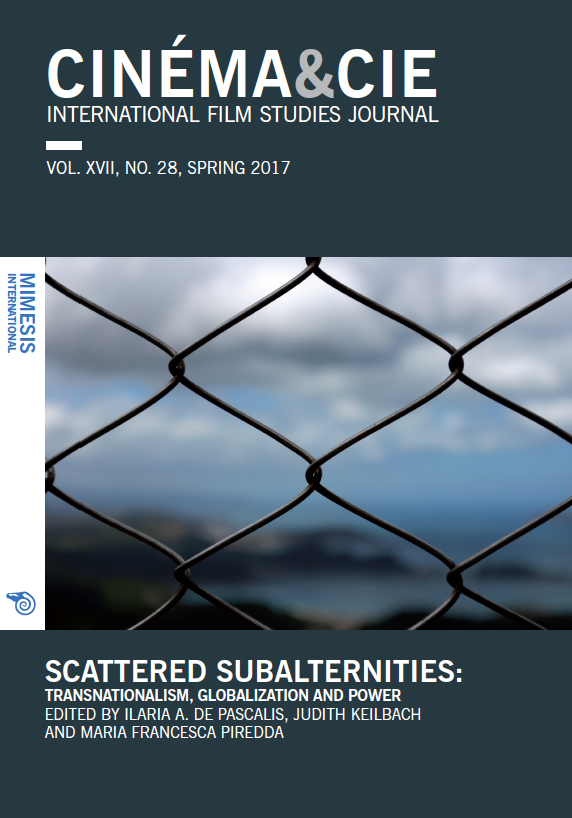 Who is the Subaltern in the current global frame? Has neoliberalism changed the experience of subalternity? How do subalterns write history and what kind of history is written about subalternity? Cinéma&Cie’s special issue addresses these and other questions through various theoretical approaches. The essays argue for the importance of a multidisciplinary perspective and address issues of media representation from a variety of perspectives, such as visual culture, history, philosophy, and postcolonialism. They focus on contemporary subalternity, and especially on the migrant – characterized by diaspora and condemned to invisibility by hegemonic power – and the postcolonial subaltern – who has now the possibility to express her/ himself in unexpected ways, in particular by using new media. The scattering and pervasiveness of media devices and gazes is discussed in depth in these essays, which delve into the dialectic between subaltern cultures and agency embodied in the subjects of representation.

Ulrike Mothes, Video Memories Of Diaspora: Searching for Identity in Between Homelands
Abstract

Transcultural studies often theorize third world diaspora from within the dominant Western context, and its relation to the culture of their postcolonial home. This essay takes on a reversed perspective, aiming to examine filmic representations of two young Western subjects in third world countries. The filmmakers Thomas Brück and Bentley Brown spent their formative years as members of Western diaspora families in Mexico and Chad. Using the medium of film, their work navigates cultures — as the works of certain subaltern immigrant artists and filmmakers in the West do. By analysing their personal documentaries Third Culture Kid and Oustaz, the essay investigates their cinematic means of negotiating transcultural identity across geopolitical borders. Special emphasis is given to the employment of home video material to reconstruct and represent memory.

Maja Figge, ‘Actions of the Eyes of the Fleeing’? Refections on the In/Visibility of Harraga Videos
Abstract

Against the backdrop of the media practices of the ‘summer of migration’ in 2015, this article asks if and how cell phone videos recorded by migrants and refugees and circulated via social media channels have not only the capability to change and extend modes of representation. It analyses harraga videos — short cell phone clips of the clandestine passage across the Mediterranean, uploaded on YouTube — by focusing on the act of capture. With reference to Helen Grace and Rey Chow, the essay argues that despite the relative invisibility of the videos, they are not just simple documents, but rather constitute the present of the harraga, and thereby form (local) publics. In this light, they can be understood as a political (media) practice, which intervenes in the visibilities and visualizations of the necropolitical European border regime.

This essay investigates the different ways memory is articulated by contemporary writing and artworks that emerge from experiences of migration, exile, diaspora, and cultural hybridity. These productions express a creative resistance connected to narration and participation, while proposing alternative ways of opening the archive from the perspective of the voices and visions that are completely absent or pushed to the margins. For example, the encounters with the histories and the bodies evoked by Derek Walcott, as well as the innovative and trans-local languages proposed by the contemporary visual artists and filmmakers considered in this article, question the limits of historiography, multiculturalism, and institutional practices of archiving through lost traces and inappropriate objects.

Sudeep Dasgupta, The Aesthetics of Indirection: Intermittent Adjacencies and Subaltern Presences at the Borders of Europe
Abstract

Luca Guadagnino’s A Bigger Splash (2015), I argue, produces a sensorial registration of the presence of scattered subalterns. More importantly, an ‘aesthetics of indirection’ (con)figures the disturbing island-space between Italy and North Africa, where the intermittent appearance of subaltern subjects disturbs normative understandings of place and produces counter-intuitive understandings of relationality. The filmic construction of ‘intermittent adjacencies’ between subaltern presences and narrative protagonists produces figurations of disturbing relationalities between privilege and destitution, pleasure and pain, life and death. The logic of intermittent adjacencies left conspicuously un-integrated by the plot provide a sensorial and political provocation for thinking through the geopolitics of globalization in the context of the displacement of people.

Anu Thapa, Framing the Subaltern: The Reemergence of the ‘Other’ in Neoliberal Indian Popular Cinema
Abstract

The figure of the subaltern, construed primarily in terms of class difference, went missing from Indian cinema screens following the emergence of the Non- Resident Indian (NRI) protagonist in the 1990s. In the neoliberal phase post- 2000, the subaltern has resurfaced in Indian cinema narratives, positioned to be delivered by the technological know-how and entrepreneurial spirit of the foreign-returned Indian man. This paper analyzes the reemergence of this disenfranchised ‘other’ through a close reading of three mainstream Hindi films — Swades: We, the People (Ashutosh Gowariker, 2004), Delhi 6 (Rakeysh Omprakash Mehra, 2009) and Gori Tere Pyaar Mein (Punit Malhotra, 2013). All three films place a premium on the entrepreneurial spirit embodied by the cosmopolitan protagonist, which is facilitated by the urban educated heroine. The subaltern is transformed into the collective of ‘the people’ and subsequently denied enterprise. Within the context of cinematic representations of the subaltern since India’s independence, this portrayal of the subaltern as objects of deliverance is emblematic of Indian cinema’s neoliberal phase. Engaging with recent scholarships on Hindi cinema’s global ambitions, this paper briefly delves into the implications of the subaltern’s return to the notion of the ‘popular’ in Indian popular cinema.

Renato Loriga, A Revolution in Time: History and Identity in Raya Martin’s Autohystoria

Farah Polato, Where Are My Houses?
Abstract

In recent years, several audiovisual works made in Italy by (partly or wholly) people hailing from the former Italian colonies of Eritrea, Ethiopia and Somalia have contributed to a challenge to the notions of displacement, deterritorialization and belonging in contemporary Italian society. They trouble the spaces of contact between people, of experiences and memories, therefore highlighting ‘the historical continuum and cultural genealogy’ (Lombardi-Diop and Romeo, 2012) between the colonial past and the present. By examining displacement and deterritorialization as possible expressions of belonging, rather than polarized fields in relation to it, this essay explores several examples where characters and filmic narrations assume the presence in the ‘here’, and the possibility to convert the ‘here’ into ‘home’, by modifying relations with people and places.

Angela Bianca Saponari, The Modernist Roots of the Mind-Game Film: The Example of an Italian Puzzle
Abstract

This essay contributes to the analysis of a phenomenon that became diffused between the 1990s and the 2000s: the mind-game film. It focuses on the destabilization of the classic story in the light of new digital technologies, providing original strategies of production and new possibilities of fruition. There are several studies of the different typologies of mind-game films, of the nature of narrative developments introduced by various directors, and of the technical aspects relating to the psychological dynamics in the image-narratorspectator relationship. However, there are fewer studies of the modernist roots of this phenomenon. Elsaesser locates the mind-game film within the same category of European subjective cinema during the 1960s. In other words, it constitutes a meta-cinematographic phenomenon, whose origins lie in the European vanguard modalities of experimentation. Following Elsaesser’s theories, I suggest that it is possible to study the parallelisms and elements of disruption between that subjective cinema and these new forms of experimentation, which appear to conciliate commercial needs and authorial perspectives. In particular, I seek to reveal the traces of this relationship in the cinema of Elio Petri, using Lev Manovich’s category of the ‘narrative database’.