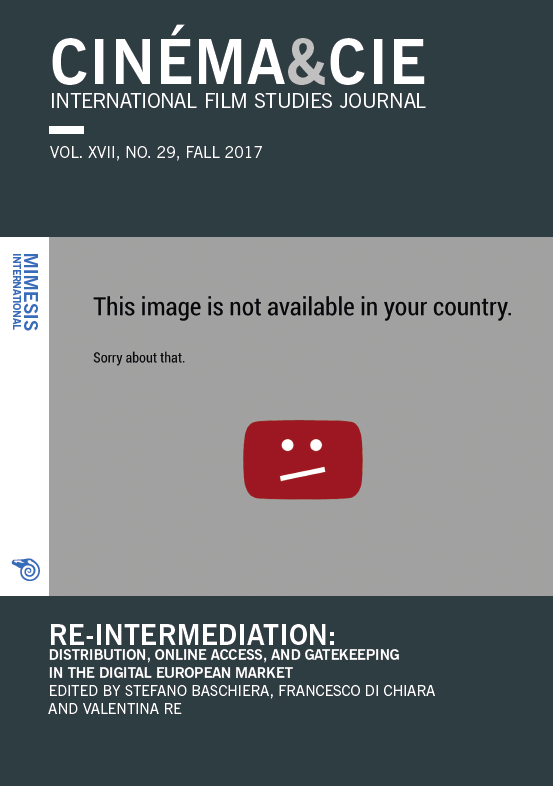 Edited by Stefano Baschiera, Francesco Di Chiara and Valentina Re

This special issue of Cinéma&Cie analyses the logic and processes of re-intermediation emerging in the contemporary European media industry landscape, providing an opportunity to bring questions of availability, text circulation and gatekeeping to the centre of scholarly debates and investigations. Through contributions showcasing a wide array of methodological and theoretical approaches, the volume illustrates and analyses the presence of new gatekeepers, their impact in shaping texts and their consumption in different European contexts. Its case studies include file sharing, Curzon Home Cinema, VOD services and the problematic implementation of the Digital Single Market policy.

Stefano Baschiera, Francesco Di Chiara and Valentina Re, The Logic of Re-Intermediation: An Introduction
Abstract

The introduction is structured in three parts. In the first, we define the logic of reintermediation as the change in traditional intermediaries and the development of new, different gatekeepers; we then emphasize its importance for a full understanding of the cultural and economic struggles in the contemporary European audiovisual market. The second part provides an example of the ongoing re-intermediation processes by focusing on the lesser known case of ‘aggregators’ for VOD platforms, in reference to the activities of the international company Under the Milky Way. Finally, the third part provides a detailed overview of the articles included in the special issue.

Luca Barra, On-Demand Isn’t Built in a Day: Promotional Rhetoric and the Challenges of Netflix’s Arrival in Italy
Abstract

In the months surrounding Netflix’s arrival on the Italian market, different media outlets presented the platform not only as revolutionary, a game-changer, but also as a threat for established broadcasters. After a long wait, with hype fanned by the news coming from the US, the launch in many other European markets, and the strengths of the first branded productions, Italian TV audiences have also been able to access Netflix’s library and original series, since 22 October 2015. On the one hand, Netflix has reaped the results of its effort to establish a long-term promotional discourse in Italy. On the other, however, Netflix’s late appearance was also couched in the context of a complex media scenario and an already established national on-demand market. A rhetoric of disintermediation has been carefully constructed at the exact moment when a powerful global intermediary was entering the Italian market, masking its (future, intended) gatekeeping role. Adopting a media-industry and production-studies approach, this essay reconstructs Netflix’s arrival in the Italian landscape, focusing on the promotional discourse and its rhetoric, and on the reactions from the press, to give a deeper, more nuanced view of the phenomenon in the national media arena.

This article offers an analysis of one small-nation market’s perspective on the current and expected changes of digital distribution and its intermediaries. It demonstrates how key stakeholders in the Czech audiovisual distribution sector are reacting to regulatory processes at the EU level and how they are reconsidering their existing business practices, strategic plans, and structural positions vis-à-vis new global trends and competition in the evolving sphere of digital distribution. The article is not a full-fledged analysis of the Digital Single Market’s (DSM) potential impacts: instead, it considers DSM as just one factor in the strategic thinking of stakeholders, a factor that functions as a catalyst and a focal point in both business operations and policy-making.

Giorgio Avezzù, The Data Don’t Speak for Themselves: The Humanity of VOD Recommender Systems
Abstract

There is a widespread myth and rhetoric, even in academic discourse, about data and VOD recommender systems, especially with regard to the notion of automation and the innocence of this presumed automation. Behind this rhetoric lies the de-humanization of machine computation, i.e. the removal of all the processual, decisional, ‘oriented’ aspects informing every online recommender system. This essay focuses on content-to-content video recommendations, which are based on patterns of similarity between different contents, and it intends to show that there is nothing neutral — even in the most seemingly ‘objective’ form of video recommendation. The aim is to rediscover those very processual elements of the ‘data supply chain’ — regarding how metadata are created and collected, and how algorithms are configured — so as to make them critically observable again: the funnels, decision points, the multiple layers of human mediation and filtering, in both their relevance and sensitivity.

While recent years has witnessed the proliferation of new modes and methods of informal distribution, a certain sector of unauthorized media distribution, namely ‘The Scene’, has been subject to surprisingly little academic consideration. ‘The Scene’ is a collective title for several self-identified ‘release groups’ who collaborate to remove copyright protection from media artefacts (e.g. games, software, films) and repackage them into ‘releases’ for distribution online. Despite assertions that the Scene is the source of ‘most’ pirate copies circulating online, the role these online gatekeepers play in selecting what is ‘released’ into unauthorized online distribution networks has yet to be thoroughly explored. As such, this paper will examine how the practices of The Scene intersect with the wider unauthorized distribution ecology and how they might act as both tastemakers and gatekeepers in an online context that is frequently perceived to be ‘free’, ‘open’ and untroubled by traditional intermediaries. In doing so, the paper will consider how the practices of the Scene are emblematic of the wider processes of re-intermediation that are being felt across the audio-visual industries.

This article considers two recent attempts at developing networked film cultures in online exhibition spaces. Focusing on two video-on-demand platforms, Festival Scope and Curzon Home Cinema, the article examines how VOD is being positioned and utilized as a tool to develop film-literate audiences while also serving the interests of the film industry by promoting and exposing films to different geographic markets. While Festival Scope originated as a platform for industry insiders to view and gather information about films, Curzon Home Cinema has emerged in the last five years as a leader in day-and-date online releases of art films for audiences in the UK and Ireland. The emergence and growth of both platforms is examined with special attention to the rhetoric of on-demand spectatorship as a special event. In both cases, the platforms’ presentation of films on-demand, concurrent with their theatrical (Curzon) or festival (Festival Scope) screenings, is offered to audiences as a privileged moment of participation in film culture. The article then argues that these platforms should be understood in close relation to the prevalent discourses of European film policy, funding and industrial support. Both Festival Scope and Curzon are funded in part by Creative Europe’s Media programme. The article situates the growth of these on-demand platforms in relation to Creative Europe’s competing cultural and economic discourses of public access and competitiveness. An analysis of Creative Europe’s funding schemes reveals how VOD figures into the goals of European cultural and economic integration. The re-intermediation of film culture that is fostered by VOD platforms such as Festival Scope and Curzon is considered with regards to how it aligns with Creative Europe’s cultural and economic objectives and its emphasis on digitalization and transnationalism.

Any interest in the relationship between today’s popular culture and images or visibility cannot escape the sustained significance of images delivered by various forms of graphical user interfaces. Since these interfaces are not only tools or even mere preparations of presentations but meaningful presentations themselves, this essay proposes to analyze them as operative images. By delivering a sort of signs, that combine iconic as well as symbolic and indexical qualities, operative images sketch out and perform interrelated concepts of both: the user and the computer/the digital. From this follows the importance of analyzing popular interfaces as a special kind of staging – as a mise-en-scène ‘depresenting’ the power and work of the computer and interrelating with the promises/fears shaping the myth of ‘the digital’ since the late 1980s. Struggling for a critical position against the mythical term ‘digital’, I have proposed the neologism ‘digitalicity’ [Digitalizität]. I will argue that establishing the analysis of ‘interface-mise-en-scène’ as something like a vital part of today’s media studies is largely and indeed long overdue. The graphical user interface of YouTube will be taken here as a case study. It will be discussed as a particular performance of the ‘aesthetics of regulation’ [Ästhetik der Verfügung], that informs the aesthetical appearance of computers, allowing and framing our handling with them. Characterized by a dialectic motion, the aesthetics of regulation raises questions of power: interfaces empower users to regulate and condemn them to be regulated at the same time.

Alberto Micali, For an Archaeology of Swarming Machines: Genealogy and the Politics of Media Dissent Beyond Representational Metaphors
Abstract

Following the presentation of a paper at the XV MAGIS — Gorizia International Spring School 2017, this article focuses on some of the theoretical premises that the legacy of postmodern thought offers for the understanding of contemporary forms of media resistance. In particular, it centres the attention on so-called ‘digital swarms’ that, also known as Distributed Denial-of-Service (DDoS), are one of the leading ‘weapons’ in the politics of digital media and network dissent. However, in the literature on hacktivism, these ‘swarming machines’ are predominantly defined via an analogy with direct action, implying assumptions based on humanist epistemologies, which limits their politics as a matter of representation. With the objective of offering a possibility to move beyond the limits of such a metaphorical impasse, genealogy is suggested as a critical approach to link, through ideas of nonlinearity and difference, postmodern thinking and media archaeological investigations.