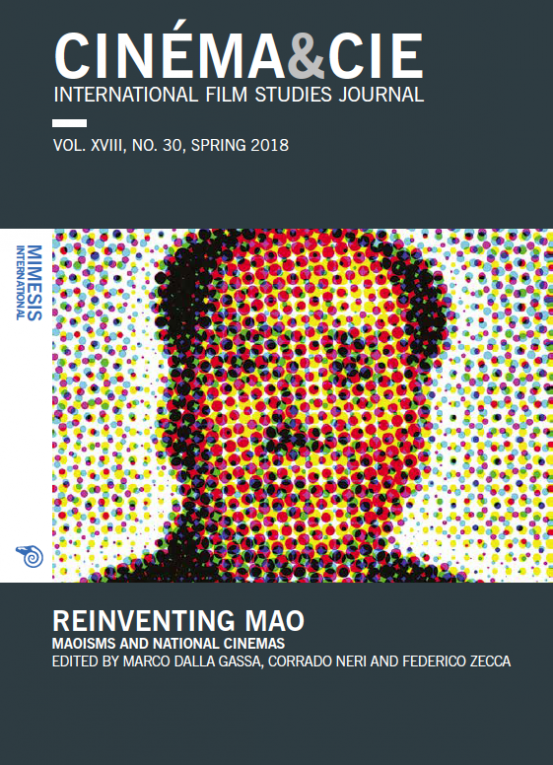 This special issue of Cinéma&Cie explores the cultural dynamics, ideological aporias and political struggles that characterize the relationship between Maoism and national cinemas, from the immediate aftermath of the Cultural Revolution to the present day. All the articles included in the special issue highlight the complexity of the process of translation and ‘reinvention’ of Maoism in different cultural contexts, focusing on subjects and historical episodes that have been suppressed in public debates and in traditional film history books.

With reference to the historical trajectory of modern French cinema, the Maoleaning period (1967-1972) of Jean-Luc Godard under the collective spell of the Groupe Dziga Vertov (Dziga Vertov group, or DVG in short) was often a controversial and divisive subject among his critics and commentators following the political watershed of French May ‘68. This essay will take two of the most provocative and representative features made during the DVG period, Vent d’est (Wind from the East, 1969) and Tout va bien (All’s Well, 1972), as the major point of departure to critically re-examine how Godard and his major film collaborator, Jean-Pierre Gorin, endeavored to revolutionize the bourgeois traditions of Western narrative cinema with the radical introduction of Maoist discourses and dialectics shortly after the wake of May 1968. Also, by reorienting some lingering epistemological and ethical questions of post-68 French Maoism back into the predominant symbolic fabric of contemporary neoliberal consensus, the aim of this paper is to re-examine the profound dialectical nexus between Western political cinema and the legacies of global 1968 to illuminate the current predicaments of leftist utopianism in our midst.

By 1978, the Khmer Rouge regime in Cambodia engaged in a limited ‘open door’ policy under the pressure of its Chinese ally. The country had been carefully sealed off thus far, but in need of a more positive image abroad, the leaders of Democratic Kampuchea invited journalists from friendly countries and representatives from Western Maoist organisations. These visitors filmed their journey in Cambodia in order to show the international public what the Khmer Rouge had achieved economically and socially within a few years. The paper examines two of the resulting productions: Kampučija 1978 (Kampuchea 1978, 1978) by Yugoslav film director Nikola Vitorović and Democratic Kampuchea (Demokratiska Kampuchea, 1978) by Swedish writer Jan Myrdal. Drawing on anthropologist Faye Ginsburg’s application of the notion of ‘parallax effect’, it compares the two works with Khmer Rouge propaganda movies. It proposes to investigate through an ethnographic lens the articulation of ‘us’ and ‘them’ performed in these films, and the way ideology both shaped and challenged forms of solidarity and identification. It argues that the ‘parallax effect’ enables a more nuanced view of the filmic representation of Democratic Kampuchea in the years 1975-1978, far from the monolithic perception people may have of it today.

This article investigates why and how the Naxal movement, a Marxist-Leninist- Maoist armed revolutionary movement which emerged in May 1967 in India, has been repeatedly addressed, adapted, and accommodated in Indian cinema. As an organized political movement with specific manifesto and vision of the nature of the state, the Naxal movement attempted to disrupt and dismantle the quasifeudal Indian social structure and an oppressive Indian state that functioned still under colonial administrative regulation, as caretaker of interests of the powerful classes. In this article, I argue that the Naxal movement helped Indian cinema to map out the history and internal architecture of political dissent in postindependence India and construct a counter-nationalist discourse. The paper aims to evaluate how the Naxal Movement serves as a resource to represent the politics of dissent in India in the 1970s in parallel cinema and as a critique of the neo-liberal policies of the Indian State in the postmillennial Bollywood films. It aims to analyse selected films that deal with the Naxal/Maoist movements in India as a counter historiography.

Wendy Xie, What’s Chairman Mao Got to Do with It? Nostalgia, Intertextuality and Reconstructing Revolutionary Myth in Tsui Hark’s The Taking of Tiger Mountain by Strategy
Abstract

Tsui Hark’s 2014 film The Taking of Tiger Mountain by Strategy (Zhiqu weihushan) is the latest in a long line of adaptations of Qu Bo’s historical novel Tracks in the Snowy Forest (Linhai xueyuan), one of the most canonized and adapted revolutionary works in the 1950s and 1960s. This essay seeks to trace the success of Tsui’s remake to its melodramatic reconfiguration of history, memory and nostalgia. Specifically, it investigates the ways in which the film undercuts the reverential Maoist revolutionary discourse inherent in the original source material by modeling on the wuxia (martial arts) paradigm. In addition, the essay argues that by bookending the 1946 war story with a 2015-set prologue and epilogue, Tsui’s adaptation presents the audiences with an exquisite example of how memory invokes and re-presents the past, and ultimately points to the fictionality of the reconstructed past. Finally, the essay focuses on the film’s selfconsciously simulacral status, and argues that Tsui is motivated by a desire to address the prevailing social climate of excessive commercialization and moral decay in contemporary China, and his retelling of a revolutionary tale is deeply implicated in nostalgic longing for idealism of a bygone era.

Unlike written production, which was plentiful, only a few French fictional films about the Cultural Revolution were produced between 1966 and 1976. Nevertheless, it was the object of contradictory discourse in two films which reveal the cultural cleavages in 1960s and 1970s French society. Jean-Luc Godard’s La Chinoise (1967) and René Viénet’s Can Dialectics Break Bricks? (La Dialectique peut-elle casser les briques?, 1973) confront Maoist and anti- Maoist perspectives, as seen from France. Simon Leys’s seminal book Chinese Shadows and its problematization of the achievements of the Cultural Revolution serve here as a point of departure for an analysis of the various debates of this period. This article will also take into consideration a few contemporary Chinese films that form a sort of counterpoint to the French fiction films of the 1960s and 1970s. Wang Bing’s The Ditch (Jiabiangou, 2010), for instance, unveils the consequences of the Hundred Flowers Campaign and the Great Leap Forward (1958-1960).

Yomi Braester, We Have Never Been Chaste: Sexuality and Cinephilia in Post-Maoist Cinema
Abstract

The essay examines post-Maoist cinema by looking at two interrelated issues: the portrayal of sexuality and cinephilia during the Maoist period. Sexual urges are inextricable from post-Maoist cinema; in particular, the connection between eros and revolution serves to criticize Maoism from within. Another common trait is the long shadow cast by films made in the Maoist period. Whether by explicit reference to movie-going in the diegesis or through allusions understood by those familiar with Maoist oldies, post-Maoist cinema tends to be highly cinephilic. The onscreen reemergence of cinephilia – often in conjunction with the eruption of youthful libido – is no low-stakes game; rather, it enables a critical view of Maoism. This essay focuses on The Dreamers (The Dreamers – I sognatori, Bernardo Bertolucci, 2003) through a diachronic and synchronic lens, placing the film side by side with other movies – the historical precedent La Chinoise (Jean-Luc Godard, 1967) and the roughly contemporary Chinese film In the Heat of the Sun (Yangguang canlan de rizi, Jiang Wen, 1994).

Pepita Hesselberth, Connect, Disconnect, Reconnect: Historicizing the Current Gesture towards Disconnectivity, from the Plug-in Drug to the Digital Detox
Abstract

This essay picks up on the invitation extended by the sessions on ‘Media Archeology: Network(s)’ at FilmForum 2017 to engage, with some political urgency, in ‘an archaeological excavation of the post-Fordist, post-industrial and global emergence of the Network(s).’ In a time and age in which the network, to speak with Galloway and Thacker, ‘has emerged as a dominant form describing the nature of control today, as well as resistance to it’1 such a historicizing move seems all the more important, not just for the sake of historical depth, but also, in particular, in our attempts to refine our understanding of the present-day situation. Taking up their invitation and yet giving it a somewhat different twist, in this paper, I will appraise a genealogy of what could be seen as the inverse of the network, or the idea of networked connectivity, which, I argue, in the last decade has manifested itself most clearly in the desire to disconnect. Drawing a link between the current preoccupation with digital detoxing and anti-television movement of the 1980s onwards, I will reflect on the relevance of doing such a historicizing comparative analysis.