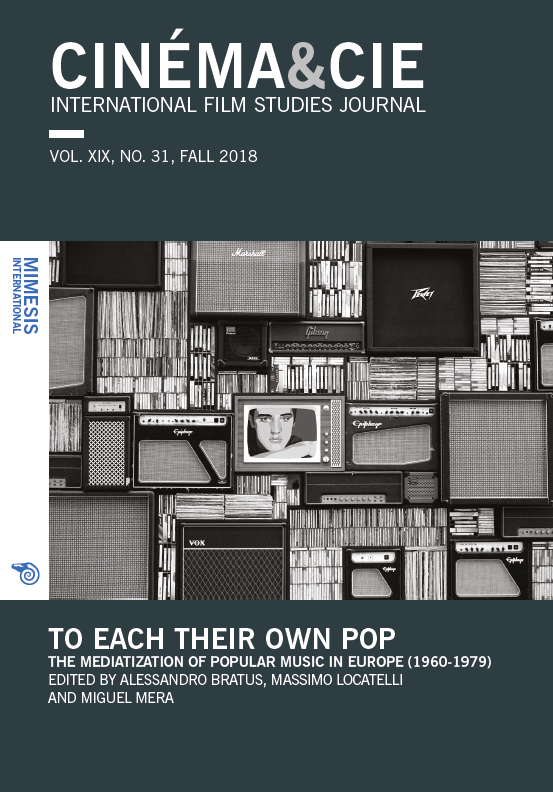 Pop music meets the media… This issue is dedicated to a social and cultural phenomenon that we could call the ‘mediatization of pop music’. With a particular focus on the 1960s and 1970s, it is our contention that these two decades significantly shaped our current mediatized culture both in its form and content. Since then, instead of political or confessional organisations, it was popular media and music that offered the contact point between public and private spheres, between the personal and the political, and this shift should be reconsidered as a focal trope in modern culture. We hope to widen the notion of mediatization by highlighting a range of historical processes that have had phenomenological after-effects: the experiential prototypes that were developed during this pivotal period later became persistent paradigms, and paved the way for the mediatized world we still live in.

Alessandro Bratus, Massimo Locatelli and Miguel Mera, Experiencing Mediatization: The Legacy of the 1960s and 1970s

Ewa Mazierska, Softening of Polish Rock of the 1960s and Early 1970s through Screen Media
Abstract

The purpose of this article is to examine the representation of Polish rock in Polish cinema and television in the 1960s and the 1970s, in other words (roughly) the first decade of the existence of Polish rock. My argument is that these films minimize their associations with youth, contemporaneity, modernity, rebellion and a western outlook — typical of rock — amplifying connotations which are not seen as central to the genre, such as its closeness to folk music and national culture. In my research I will draw on the history of Polish popular music and Polish cinema in the 1960s and its interface, and the division between pop and rock.

Alessandro Bratus and Maurizio Corbella, This Must Be the Stage: Staging Popular Music Performance in Italian Media Practices around ’68
Abstract

Popular music gained increasing cultural relevance in Italy during the Sessantotto (’68) — a tumultuous period essentially extending over a decade, until about 1977. Because of the ideological baggage that performance acquired in those turbulent times, representing performing musicians and the social bodies interacting with them in live contexts became a key challenge for audio/visual media such as cinema, television, radio, and the recording industry. This article attempts an intermedia approach to liveness in mediatized popular music performance by cross-examining the concurrent ways in which two of the abovementioned media practices — namely film and record production — dealt with the increasing significance and presence of popular music performance in Italian culture at that time. The agency of media as relational frames between performers and the public was strategic in determining the affordance of new popular music genres among young Italian audiences in the 1960s and 1970s. We wish to suggest that the impact of these genres on Italian young audiences reverberated across different media, generating a set of recognizable patterns.

This chapter investigates the development of audiovisual media through the prism of popular music performance on television, as it developed in the rich music environment around and within the Danish Broadcasting Company (DBC) during the 1960s and 1970s. The focus is on the relation between the institutional setting and the preferred program formats’ visualization of music. On the one hand, music on television influenced the relationship between musical genres and visual (re)presentations, and helped to shape the (changing) visual genre conventions. On the other, generational discussions of music programming, choice of repertoire and not least how the various concert formats were (or were not) linked to a notion of liveness can be seen as a changing agent for the institutional approach to audiovisuality. The study draws on archival television program material and interviews with former employees from DCB, and discusses television concerts as the prevailing programming ideal for Danish television in the period 1964–1978.

The case study for my paper will be the late work of Rainer Werner Fassbinder, which dates from a time when the author’s concern to provoke and explore new languages was reconfigured in a more mainstream and international manner, shaping a new way of imagining popular film (Despair, Despair. Eine Reise ins Licht, 1978; The Marriage of Maria Braun, Die Ehe der Maria Braun, 1979) and television production (Berlin Alexanderplatz, WDR, 1980). In his work with a stable team of technicians (with regard to the soundtrack, musician Peer Raben, editor Juliane Lorenz, and sound engineer Milan Bor), it may reasonably be claimed that he transformed the passionate explosion of the “long 1960s” into a mature mode of production ready to enter the 1980s and beyond and to reach into our times. In this paper I will explore the experiential dimensions of the soundscapes and the music, arguing that the advent and practice of soundmixing in the 1970s, the way in which this was used to intensify the whole audiovisual experience in film and television fiction, played an important role in reconfiguring our reflexive consciousness of social relations and political issues as individualized and emotionalized.

Miguel Mera, Popular Music on Screen and the Road to Brexit
Abstract

This article traces some of the political and cultural implications of the use of popular music and popular musicians in British films of the 1960s and 1970s, demonstrating different, and sometimes incompatible, facets of the British psyche in relation to identity, independence, nationalism, nostalgia, and exoticism. These divergent perspectives seem to have emerged and ruptured in the 2016 Brexit vote, but are in fact deep-rooted and central to the British circumstance. Using Adler-Nissen et al.’s concept of the performativity of Brexit, which works both as a promise of a different future and to establish a specific past, various interrelationships between culture, identity politics, stardom, and music can be determined. These are explored through three general typologies — ‘Discovering Europe’, ‘Defeating Europe’, and ‘Reappraising Home’ — in order to demonstrate that the decision to leave the EU in 2016 was not a flash in the pan, but rather a long and protracted journey reflecting conflicted notions of freedom and accountability.

A long-standing and intimate link exists between avant-garde and scientific cinema. In the 1920s, in fact, the former contributed to the construction of the latter: on the one hand, by its systematic inclusion in film clubs and film societies screening programs; and on the other, by catalyzing the theoretical reflection on medium specificity because of the particular techniques it develops. In this essay I will examine the contribution of scientific slow motion to 1920s film theory, investigating how this technique conveys an epistemological shift in the concept of revelation, from the scientific observation of the invisible to the naked eye, to the deep understanding of previously unknown aspects of reality. Through the words of scholars and philosophers, as well as filmmakers and theorists (Louis Delluc, Germaine Dulac, Jean Epstein and Jean Tedesco, among others), I will discuss several concepts that marked the aesthetic theories of the time, such as photogénie, cinéma pur, and optical unconscious.

Between the end of the 1950s and the beginning of the 1960s, monochrome painting became a relevant tendency in Italy, crossing post-Spatialist and post-Informal practices. In the same years, the modernity of mass culture had overwhelmed a society which was mainly agricultural in a short time. As great symbols of this irreversible mutation, cinema and media image soon became a new lexicon for the research of many artists. By drawing on sources of that time intertwined with more recent theories on media and their relationship with modernity, this article analyses Fabio Mauri’s ‘screens’ and Mario Schifano’s ‘monochromes’ as an attempt of narrating the new ‘society of spectacle’ through the paradox of the absence of images. For both Rome-based artists, modernity seems at the same time something to reveal and to resist. If the former chooses a language that anticipates Pop grammar, the latter seems to look for a synthesis between new mass society and humanism. Both testify to the Italian way of the Post-War modernity.