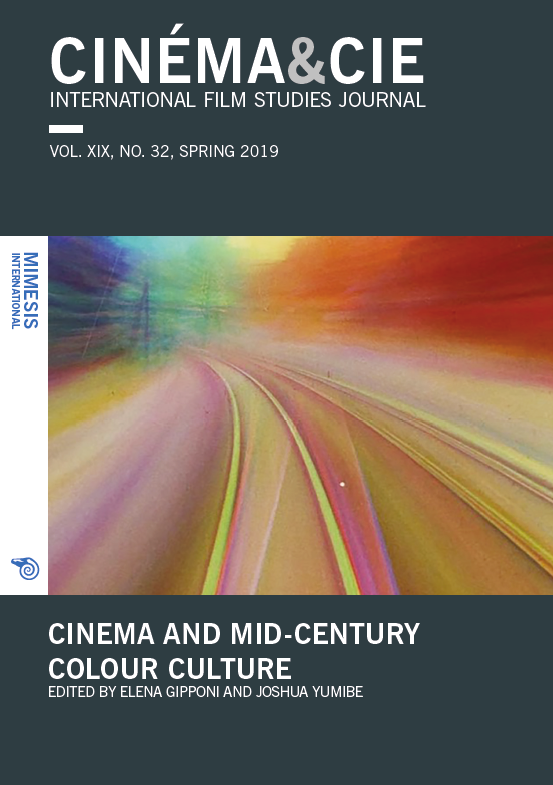 Suspended between transparency and naturalness on the one hand, and opacity and artificiality on the other, colour is integral to the cinematic apparatus in an ideological as well as technological sense. This special issue of Cinéma&Cie aims to address colour in the middle decades of the twentieth century — from the 1930s to the 1960s — examining it as an analogue and material quality of still and moving images and, more broadly, of the intermedial cultures in which cinema was embedded. During the mid-century, colour gradually became the norm, and film and media from the era track this transition formally as well as culturally, showing a constant tension within colour between the display of its technical wizardry and its concealment, and between attempts to control it and its own autonomous resistance to regulation.

This article traces the historical development of aesthetic practices of colour in the generic and industrial context of Nikkatsu Action Cinema of postwar Japan, and how they influenced the idiosyncratic style of Suzuki Seijun. Nikkatsu Action’s needs as a genre devoted to a youthful and energetic subject matter shaped its colour design, and its filmmakers developed a bright, vibrant colour aesthetic by drawing on neon lighting and coloured light filters. It was within this context that Suzuki’s colour style took shape. His earliest experiments take the Nikkatsu colour idiom and bend its diegetic pretexts to motivate sudden colour transformations. In his later Nikkatsu films, Suzuki elaborates on these experiments by transforming them into a critical component of his formal strategies. In Gate of Flesh (Nikutai no mon, 1964), he gives each of the four main female characters a colour-coded costume, and in each woman’s internal monologue her dress colour becomes the colour of the entire background, suffusing the image with her subjectivity. Suzuki uses sudden colour transformations to punctuate violent action in his later action films, which this article considers in a reading of Tattooed Life (Irezumi ichidai, 1965)’s climax. Suzuki’s experimentation gradually refines his colour design to an abstraction that belies its origins in popular genre cinema.

Sarah Street, Keith M. Johnston, Paul Frith and Carolyn Rickards, From the Margins to the Mainstream? The Eastmancolor Revolution and Challenging the Realist Canon in British Cinema
Abstract

This article focuses on Eastmancolor’s introduction in the British film industry from 1954 to the complete adoption of colour by the end of the 1960s. We discuss how aesthetic experiments with colour offer a compelling parallel history to debates concerning British film genres, films and filmmakers. This approach allows us to see British film history through a different lens, to move beyond the constraints of the monochromatic realist canon and explore familiar and unfamiliar films in the ‘fresh light’ of colour. We select key film genres including the adoption of colour within the social realist film, considering whether blackand- white conventions were disrupted by the addition of colour. The section on Hammer horror films demonstrates how colour popularised a largely dormant British genre, while our consideration of the popular Carry On… comedies looks at colour’s centrality to a new narrative approach for that series. Finally, we consider the historical biopic, focusing on Isadora (Karel Reisz, 1969) in relation to how colour defined thematic and narrative concerns with psychology, temporality and symbolism. We conclude that these years of experimentation constitute an essential transition period in which filmmakers were engaged in a complex negotiation with intermedial chromatic trends.

This paper explores the professional cross-connections between the Walt Disney studios, who pioneered the early adoption of Technicolor IV, DuPont, whose chemical research provided the colour pigments and Pyralin cels used in Disney’s films, and Faber Birren, one of the most influential corporate American consultants in colour design and marketing. It considers several aspects of colour that have not previously been considered in colour or animation studies: first, the material history of cellulose nitrate and acetate and its structural and aesthetic relationship to colour and transparency in animation; second, the role that colour paints and pigments developed by the DuPont company played as part of its targeting of Hollywood as a strategic new market, and third, the ways in which colour production was aesthetically informed by colour consultants like Birren across multiple realms, from cinema to interior design and architecture. By considering how colour production and design was situated within larger corporate strategies at DuPont in which colour was key to its industrial and consumer markets, I hope to enrich our understanding of the role that Disney, DuPont and Faber Birren played in the colour revolution of the mid-twentieth century.

Since the early twentieth century, colour has been used for the purposes of improving health, well-being and safety, optimising productivity, reducing accidents, and minimising fatigue and stress. In the context of these interests, it became highly important to systematically study the reactions that colour could have on a standard subject, in order to manage and regulate the space and time of the experience, from work to leisure, education to treatment. These chromo-technics of regulation can now be studied based on one of the possible meanings of the concept of ‘biopolitics’ as proposed by Michel Foucault. The essay focuses on Italy and particularly the period between 1957 and 1964, when several initiatives dedicated to colour were implemented. These were years of strong national economic growth and increased life expectancy, giving rise to a growing wave of ‘chromophilia’. I aim to highlight several points of convergence between the dissemination of chromo-technics and Red Desert (Il deserto rosso, Michelangelo Antononi, 1964) in order to demonstrate how the film develops a subtle consideration of colour biopolitics at the centre of contemporary visual culture.

This essay discusses the production, funding, and circulation of Design Workshops (1940–44), a group of 16mm Kodachrome films produced at László Moholy-Nagy’s Chicago-based School of Design (formerly the New Bauhaus), to explore the role of colour theory and practice in the communicative agendas of Moholy and his corporate sponsor Walter Paepcke, chairman of the Container Corporation of America. As a symptomatic foray into the mid-century category of ‘communication’, the films collected as Design Workshops — at once documents of pedagogical theory and quasi-corporate promotional messages — involved moving images both in zones of pedagogical experimentation and in the more instrumental domains of public relations, packaging and brand management. In the case of Moholy-Nagy’s School of Design, colour experimentation and creative making in the synthetic materials of the post-war — Saran or plywood — were wedded to the inculcation of forms of democratic subjectivity (perceptual skills, epistemologies, creative capacities) that the artist saw as essential to post-war citizenship at mid-century. The essay demonstrates Moholy-Nagy and Paepcke’s overlapping investments in colour’s functional, communicative dimensions at the School, and argues that colour film production in Design Workshops fuelled a vanguard humanities vision at mid-century. The essay reads Design Workshops as an allegory of that vision and its limits, performing the work and pedagogical theory of the School for potential donors and funding agencies like the Rockefeller Foundation.

Within the context of the ERC Advanced Grant Filmcolors I investigate subjectivity, affect and aesthetics from an historical perspective, drawing on ideas developed within the field of the history of emotions. However, while most of this research is of a synchronic nature, my work contains a strong diachronic component, based on Fernand Braudel’s concept of the ‘pluralité des durées’ (La Méditerranée, 1966). Following Braudel, I distinguish three layers: 1. the layer of slowly changing affects and connected ‘topoi’; 2. the foundational layer of culture and discourse; and 3. the film under investigation. In this essay, I lay out my theoretical and methodological reflections by focusing on colour patterns used in films that represent hallucinations. I will lay out several examples of hallucinatory scenes (level 1) and explain their common (biological) grounds. Further, I will zoom in on 1960s psychedelic culture characterized by hallucinating drug use as entertainment and as therapeutic tool (level 2). The film of interest (level 3) is The Trip (Roger Corman, 1967), which precisely represents this culture. A combination of the analyses of the three levels brings interesting new perspectives on the 1960s, its psychedelic film culture, and how this relates to the topos of colourful hallucinations.

Anna Caterina Dalmasso, The Body as Virtual Frame: Performativity of the Image in Immersive Environments
Abstract

Immersive environments perceived through head-mounted displays allow us to experience a tridimensional virtual space, no longer limited by the frame boundaries which have traditionally characterized our perception of images. By virtue of its capacity to overcome the image threshold, virtual reality is often described as the most powerful tool for incorporating the perception of the other, that is as the ‘ultimate empathy machine’. The idea of dissolving the image frame is also the theoretical pivot of A.G. Iñárritu’s latest virtual reality work Carne y Arena, in which the Mexican director implemented unprecedented virtual technologies in order to tell the experience of a group of refugees trying to cross the border between Mexico and the United States. Through an analysis of Iñárritu’s installation, I aim to undo the empathy and immersive rhetoric through which VR contents and devices are presented, and argue instead that VR experience is pierced by a number of discontinuities and gaps in perception, with largely neglected potentialities. By interrogating the overlapping of the limits of the image, the boundaries of the body and those that are established by geographical and biopolitical borders, I show how in virtual reality, if the frame of the image seems to disappear, then the very function of framing does not dissolve, but, rather, is assumed by the experiencer’s body and embodied gaze.