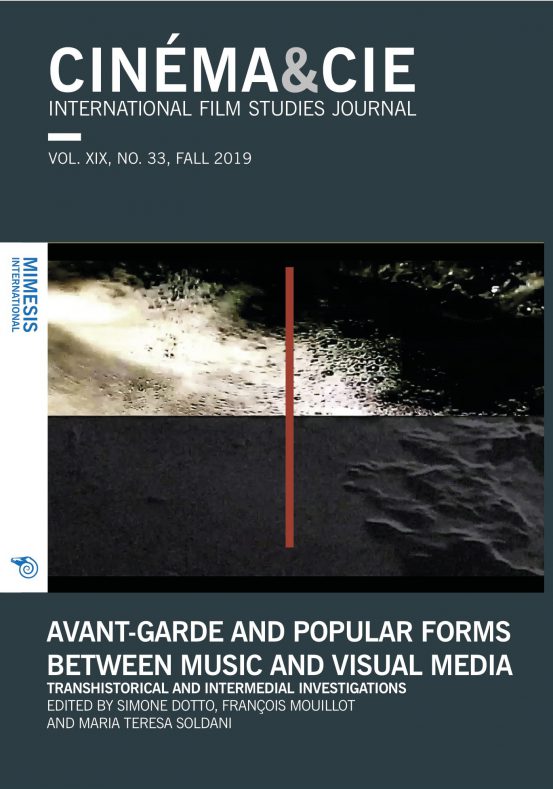 This special issue of Cinéma&Cie aims at pushing the discussion on the relationships between avant-garde arts and popular culture far beyond traditional scholarship on the topic, stressing the concept of cultural history more than the specificity of film, media and music histories. By adopting a global perspective, the authors will elaborate useful analytical and. theoretical tools to re-assess the “avantpop connection” as a dynamics of two-way exchanges across several artistic and media domains and different geographical and historical contexts.

The New York Film Festival Downtown (1984-1989) was, in the strict sense, not a film festival. But then again, it depends on how film is defined. On three nights, on the stage of a downtown night club, films were shown unfinished, as excerpts or slides, they alternated or shared a stage with performance, theater and dance pieces involving projections, or experimental live happenings. This essay articulates that the festival’s messiness–that ‘it wasn’t pristine’, as festival organizer Ela Troyano described it–should above all be considered as its most productive structural element: The New York Festival Downtown both reflected and encouraged the downtown scene’s mixing of media, and its collaborative, experimental, and interdisciplinary practices. In doing so, it not only pushed the format of the film festival, but challenged the notion of film itself. And while remaining a local artist-curated initiative, the festival’s program also traveled, thereby bringing downtown to Berlin, Bielefeld and Buffalo, and stretching the scene’s local boundaries

Spanning from the late 1970s throughout the 1980s, the music-based subculture known as post-punk was characterized by an antagonistic attitude towards mass media and pop culture. This resulted frequently in acts of appropriation and parody, conducted through a multidisciplinary set of visual and performative forms of artistic expression that were complementary to music, namely film, video, performance, fashion, design and marketing. Borrowing tactics from historical and post-war avant-gardes – from Futurism to Situationism – and in line with the postmodernist ethos of such movements as the Pictures Generation, one of post-punk’s recurring targets was television, blamed for its power to produce clichés with which viewers identified. While much has been written on American and British post-punk, little is known on peripheral scenes where this subculture assumed specific traits. This paper focuses on Italian post-punk and its unique ‘response’ to the epochal passage in Italy from state television to a privately owned, diversified, commercial mediascape. Although rooted in the 1977 counterculture, which harshly criticized mass media, Italian post-punk developed an ambiguous relationship with television, shifting from critique to complicity. For some, TV was the subject of sonic and visual parodies; for others, those who embraced the music video form, it became a useful medium. The paper reconstructs the cultural milieu of Italian post-punk in parallel with the diffusion of commercial television.

The enclaves of post-industrial capitalism are surrounded by audiovisual panoramas that have emerged from European and American avant-garde experiments in composition and multimedia experience. Avant-garde approaches towards the technologization of music and democratic media choice were transformed within the consumer culture of the 1980s, and are now consolidated as commerce within modern algorithmic culture. More than any other medium, video games most fully reproduce the encompassing, participatory ideal of the postwar avant-garde, but transfused with a relentless commercialism. Video games surround the player with choice, but the impetus to design these enveloping audiovisual environments does not come from the attempt to democratize culture — it comes from an overarching consumerism and the rationalization of computer logic. Avant-garde experiments in participatory art, named ‘democratic surrounds’ by Fred Turner, and interactive music in games share a genesis in the politics of media participation that developed after World War 2, but also in the logic of computerization. The modularity and automation of new media that creates a panorama of uniquely individuated audience experiences is not new, but the meaning of media interaction has been radically transformed within a hyper consumerism that developed towards the end of the millennium.

The essay focuses on a video by Robert Cahen and Matias Guerra, Imaginary Video Landscape. For a random number of cuts from 14 archive videos, 2017. This short work, presented in some international festivals, is based on Imaginary Landscape n.5 by John Cage (1952), and offers a profound and interesting intersection between the avant-garde and popular music. Moreover, this “dialogue” is articulated and represented in electronic images by the French video-artist Robert Cahen and the Chilean multimedia artist Matias Guerra. The artists conflate their respective video archives: the images and the music produce a “video landscape” intertwining two different musical experiences, two different approaches and identities. The essay offers a critical analysis of this artwork in relation to John Cage’s influence on video-art, the several existing versions of his musical work, Robert Cahen’s musique concrète as well as to Guerra’s multimedia approach and to the composer Jahangir Selimkhanov’s studies and music inspired by Mugam musical tradition in Azerbaigian.

Gauri Nori, Tuning into the Radio in Experimental Films from India
Abstract

In India, the nexus between the film, music and radio industry ensured that every film included several songs, which in turn were broadcast on the radio. By aligning their commercial interests, the broadcast media endorsed each other and propagated the same content. Kamal Swaroop’s Om Dar B Dar (1985) and Vipin Vijay’s Hawa Mahal (2003) subversively employed this repetitive audio-visual excess produced by the mass-media industries to trace the impact of economic liberalisation and the uneasy transition of India into a capitalist society. In both films, the radio is used as a metonym to critique the aural experience in broadcast media. Whereas commercial cinema emphasises the visual, in these experimental films the acousmatic nature of the radio (as an unseen sound) helps to concentrate the focus on the auralscape. By inverting the conventions of commercial cinema and exploring different permutations, Swaroop and Vijay disrupt any possibility of synchrony between the audio and the visual track. This article intends to listen for the ways in which both films upend the hierarchies that plague film sound, allowing instead for a reduced mode of listening as theorised by Pierre Schaeffer and Michel Chion.

The essay reexamines the countercultural positionality of art rock musical works by considering the often-dismissed correlations between Western rock and the Oriental. Introducing the concept of Orientalism to Lawrence Grossberg’s five-hypothesis proposal for studying rock affects, I will focus on the case study of the Tin Drum album (1981) by the British band Japan. Through a contextual analysis of the album and a symbolic analysis of the Visions of China music video, I will examine some intricate relations between rock’s “affective Otherness” and the construct of the Oriental Otherness. Juxtaposing postmodern aesthetics with popular music and Orientalism, I will discuss the implications of reducing Orientalist cooptation to a progressive technique of music making. I will then propose the concept of ‘Avant-Orientalism’ to describe this series of musical practices and their representational problematics. Finally, I will argue that although the post-war context constructed the Oriental Otherness, this subjectivity was furthered by the avant-Orientalist cooptation to secure the affective positionality against the hegemonic. However, while the cooptation of Oriental Otherness reflects rock’s survival strategy and anti-hegemonic agenda, it inevitably re-inscribed an Orientalist ideology under its fragmented progressiveness, making the Otherness of avant-Orientalism an always-conflicted one.

This article approaches cinema through a transdisciplinary perspective joining philosophy with moving-image practice to think time, subjectivity, objectivity – and relationality. Working from the example of Dziga Vertov’s Man With a Movie Camera film, it explores the idea of the perception-cameraas a relational point of view through which the film, as an event, evolves. It understands the film as an autonomous entity evolving through this relational point of view. In so doing, it fosters a complex approach beyond the subjective-objective perspective, and discusses what Gilles Deleuze calls the “free indirect image.” This is the point of view of an unfolding subjective form that does not pertain to human perspective, but to the event perceiving itself as it evolves into its own accomplishment.