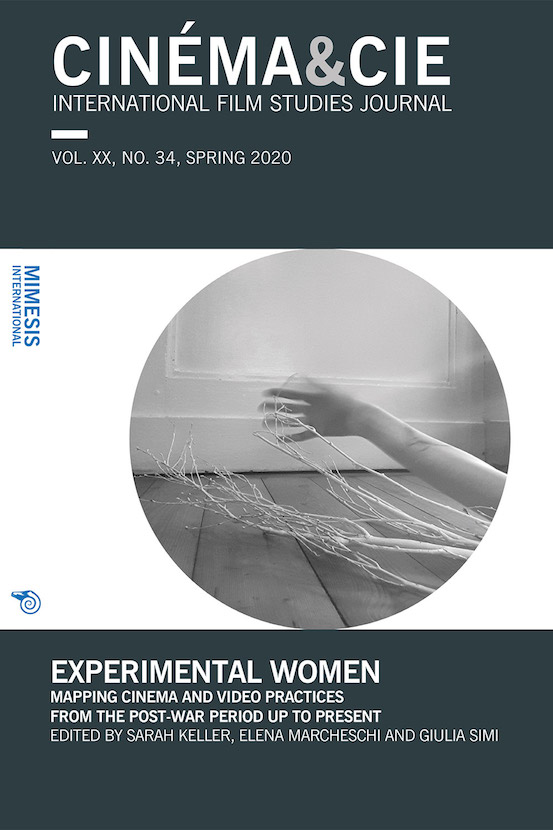 Experimental cinema, as well as experimental video practices, have always been art forms widely explored by women. Yet, while the field of cinema studies has devoted research — although only recently — to women involved in narrative and commercial films, as directors, actresses, screenwriters and in other roles of cinema industry, the history of women’s experimental audio-visual production is still little explored and would benefit from being retraced and framed in a wider historical and theoretical perspective. This special issue of Cinéma&Cie is therefore aimed at tracing women’s experimental practices at the intersection of cinema and the arts by intertwining a theoretical and historical approach through the analysis of cases studies from the mid-century up to the present time.

Rebecca A. Sheehan, ‘Give me a body then…’: (In)corporated Thinking in the Cinema of Menken, Deren, and Arledge
Abstract

For Stanley Cavell and Gilles Deleuze, the human body is essential to cinema’s ability to advance thought, but the American avant-garde filmmakers Marie Menken, Maya Deren, and Sara Kathryn Arledge go much further in locating thought in embodiment rather than beyond it, even as their films are generally absent from Cavell’s and Deleuze’s writings. For instance, as Menken’s handheld camera emanates with the movements of her body, her fidgetiness expands upon the metaphysical restlessness Cavell describes as essential to thought. Menken’s camera’s immersion in her bodily movements (rather than standing apart from them) joins her work with Deren’s Bergson-inspired films as, for instance, the context of outer space in Very Eye of Night (1952) is impossible to stand outside of or apart from, analogous to Bergson’s notion of the body in the stream. Arledge’s Introspection similarly situates the body where what T.E. Hulme might describe as a ‘complex sense of varying directions of forces’ replaces a sense of distanced sight. While Deleuze pronounces, ‘Give me a body then… The body is no longer the obstacle that separates thought from itself, that which it has to overcome to reach thinking…’ and turns to Antonioni’s, Warhol’s, and Cassavetes’ tired and waiting bodies as exemplary, I argue, it is Menken’s, Deren’s, and Arledge’s dancing, fidgety bodies that perform Deleuze’s epiphany.

Shana MacDonald, The Aesthetic Lives of Performers: Rethinking Intermediality in the Films of Yvonne Rainer and Carolee Schneemann
Abstract

This article reads together the work of Yvonne Rainer and Carolee Schneemann, as situated between film, performance, as well as dance and painting, considering what their work reveals about a specific intermedial feminist aesthetics developing at this time. It argues these traits in their work are not isolated commonalities but are shared with a wide range of feminist artists working in the 1960s and 1970s and are still echoed in contemporary feminist art. Further the article proposes to think through these intermedial relationalities as a mode of feminist aesthetics. It argues Schneemann and Rainer successfully extend the position of the female body in cinema beyond the traditional role as object to include both an embodied form of authorship, and a complex, affective performance of woman onscreen and provides the historical foundation and influence for my reading of the embodied, intermedial experiments found in feminist experimental film and media in the ensuing decades. The comparative reading of Schneeman’s film Plumb Line and Rainer’s film Lives of Performers index the artists’ shared positioning of their own bodies in the dual roles of performer and author within their films. In my analysis, this aesthetic innovation actively engages with the different embodiments of the artist/performer, the bodies onscreen and the embodied spectator the films address.

The article explores women’s interventions into landscape through the experimental practices of Cuban American multimedia artist Ana Mendieta and contemporary Brazilian visual artist and filmmaker Ana Vaz. Interested in the material and metaphorical intersections among film, landscape, and geology, I focus on the geological imagination of landscape partaking in Mendieta’s and Vaz’s art while asking what sorts of aesthetic regimes and formal strategies they choose to express it. Mendieta’s comprehension of earth as matter, medium, and a deep surface for inscription of traces comments on the materiality of film as a recording medium from the point of view of geologically oriented art. Vaz’s landscape, inflected with human interventions, emerges as an enormous living medium of memory, linking its exploration to a geological approach and the work of excavation while transforming deep time into what the artist calls ‘cinematographic multiperspectivism’. The article argues that it is the attention to the geological that unites these two artists in their critique of the position of exteriority and of landscape as an object of contemplation. Mendieta and Vaz depart from traditional aesthetics of landscape as a view by moving toward landscape as a network of relations among humans, memories, and times.

The essay is focused on how Duras’ film writing is a visual expression of the central themes of her literature (love and desire) and how certain practices of aesthetic aniconism – and their theoretical reading – refer to the manifestation of emotional and sentimental control. End of love, end of representation. The essay will also analyze how the field of feeling in Duras’ cinema is characterized by a double process of taking the loved object off the frame, from the early films to the iconoclast L’Homme atlantique (1980), the French writer’s cinematic testament. The process is accomplished in this film, the most radical and experimental of Duras’ film works, in which thirty minutes out of the forty are characterized by a black screen. The process of rarefaction of the constituent components of cinema has been achieved by denying the image itself. The anti-narrative begins to approach the idea of an iconoclastic cinema, devoid at the same time of narrative and images. This essay intends to deepen precisely this path towards the annihilation of cinema as an act of provocation.

This article makes a case for Caroline Avery as one of the most compelling experimental filmmakers of the ‘minor cinema’ generation through a close analysis of her magnum opus, Midweekend (1986). In 2018, I conducted the first interviews with Avery since she began making films in 1982. Based on those interviews, this essay offers an historical and theoretical perspective on Avery’s work, situating her within the context of the 1980s-era avant-garde, investigating her memory-based poetics of cinema, and demonstrating her relevance to contemporary experimental media culture. More specifically, this article examines Avery’s contributions to what I call, following Tom Gunning, ‘submerged narrative’, an attenuated approach to narrative construction that privileges sense impressions, affective environments, and haptic surfaces over characters and causality — or, cultivating the ambiance of a story without providing an actual story. In the second half of the essay, I turn to the work of two contemporary artists, Michael Robinson and Mary Helena Clark, to argue that their similar ideas about affective narrative environments demonstrates the degree to which the ‘minor cinema’ has contributed to the establishment of a shared language within the avant-garde that younger artists can borrow from, revise, and extend.

The essay aims at offering a journey within the documentary heritage of contemporary Italian women filmmakers, a survey drawing a varied map of approaches to the film medium, which take part in the redefinition process of cinema and its paradigms. The movies of these female directors deploy an exemplary commitment to (audio)visually exploring places, both central and peripheral, pointing out their nomadic vision and an itinerant gaze upon the world that is able to capture the current challenges and complexities with passion and rigour. Their works modulate in an original way the relationship between authorial intervention and social, cultural, historiographical investigation. Moreover, they propose a viewing on the most opaque and elusive sides of the contemporary realities, an observation that overall constitutes an innovation in the field of cinema as well as a change in the image of women, who are fully subjects of history, culture, and agency.

The present essay is an extended conversation between the authors, on the critical literature of the experimental women’s cinema and video and documentaries of Colombian female artists. The meaning of self, womanhood, and female artistic practices is in the focus of the conversation. Methodologically we approach this essay as warmipura, a female circle, or rather, as we propose, maternal space of kin and alliance-making with multiple others around and within us. It is the space of porous openness to the world, the community, co-working and co-knowing, all together the process of co-creating with multiple others both human and non-human. Openness to the other in self while seeing self in the other allows making new alliance, that in their turn open up the new worlds to explore, their potentialities. Experimental practice is seen as such maternal space, an assemblage using Deleuze-Guattarian term, of bits of life, adopting Smelik and Lykke’s words. Largely informed by the feminist new materialism and posthumanism, the essay explores the alliances, intentionally, intuitively, and organically happening in the maternal space of warmipura. The present essay focuses on the vitality of fragments and allies in the process of disassembling self through and with the video practice.

This article explores the effects of spectatorship in the short film Noah, a nearly 18’ desktop film created by Patrick Cederberg and Walter Woodman that premiered at the 2013 Toronto International Film Festival. My discussion progresses existing theories about the status of text in films and encourages us to rethink how Noah’s presentation of computer interfaces contributes to novel perspectives regarding the relationship between viewer and screen. Considering the computer screen’s remediation and its cinematic effects, specifically focusing on the acts of reading and watching in Noah, I propose that the remediated computer screen in Noah transforms reading into a viewable activity, thus recharacterizing text as moving image. Altogether, this article posits that, as a desktop film, Noah dismantles set connotations of screens across early and contemporary forms of new media and paves the way for contemporary cinema’s digital futures.